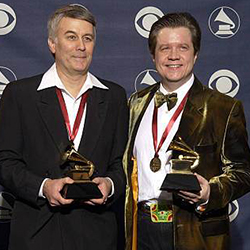 Grammy Award-Winning musician and producer Art Greenhaw, a sixth generation Texan, was born in Dallas. As a child, Art was part of the very first group of students admitted by audition to Southern Methodist University’s newly-created Piano Preparatory Department, and was eventually taught by flamboyant, master concert pianist and visual artist Lucien Leinfelder. From family nurtured musical and artistic beginnings by homemaker mother Patricia and pro musician, educator and entrepreneur father Frank, Art’s love of recording has resulted in Grammy Awards and multiple Grammy Nominations on his label, Greenhaw Records. In his performing and touring career, Art leads the quintessential Texas band and one of the world’s top historical bands, The Light Crust Doughboys. In the field of motion pictures, Art produced and arranged the music for Hollywood Film Awards Best Documentary Nominee LUGOSI: HOLLYWOOD’S DRACULA and several other music videos and documentaries.
Educated via the Texas Public Schools when the system was the standard of the world, Art graduated with highest honors and received the six Texas county-top student award, the T.A.C.T. (Teenage Citizenship Tribute) Award presented by the Dallas Morning News and the Zale Corporation. Art worked throughout school and college in the family business, McWhorter-Greenhaw, an iconic enterprise in Texas history recently honored with a State of Texas Historical Marker. Also during his early years, Art managed and led pop musical combos for a wide range of famous clients including the family of rock legend Steve Miller, Neiman Marcus, Sanger Harris, Dallas’ Temple Emanu-El and many Christian churches of all denominations. Art also during this period acted in major productions at the Dallas Theater Center, co-starring and appearing with Preston Jones, Mary Sue Jones, Ryland Merkey, Joan Prather, Synthia Rogers and many others.
Art graduated with a political science major from Southern Methodist University, and he continued business studies at the University of Notre Dame and graduate business studies at Amberton University. In civic work, Art has been chairman of the Planning and Zoning Commission, City of Mesquite, and has served on many other boards and commissions including the White House Conference on Small Business. He was awarded 2 City “Days” named for his record label and his band by proclamation of the City of Mesquite for achievements in music and business. Art was music director/pianist/guitarist during the glory days of the Mesquite Opry and appreciates the “honing of his playing chops” that this venue afforded him through hundreds and hundreds of performances. Today, Art is grateful for the hundreds of arts organizations throughout Texas who have brought The Light Crust Doughboys to communities small and large for stage shows, symphony collaborations, dance collaborations, concerts and school performances.
In addition to the roots music for which The Light Crust Doughboys are famous, Art found that by producing and arranging unusual and creative concept albums, he could create a buzz for his little label, Greenhaw Records. His artistic vision has brought him and his music in collaboration with the world’s greatest musicians and vocalists including Ann-Margret, The Ventures, Engelbert Humperdinck, James Blackwood, The Jordanaires, Larry Ford, Big John Hall, Trini Lopez, The Blackwood Brothers, Nokie Edwards, Tom Brumley, Larry “T-Byrd” Gordon, the SMU Mustang Band, the Salty Dogs and, of course, The Light Crust Doughboys and many others.
Art’s own vocals, guitar, bass, piano and keyboard playing continue to make their contributions to Greenhaw Records’ success of today. His original songs-compositions such as “Gospel Woman”, “Always Hear the Harmony”, “Our Wedding Song”, “The Builder’s Song”, “Sending Me You”, “Lugosi Hollywood’s Dracula”, “Child of the Night”, “The High Road”, and many more have played an important part in the artistic impact of Greenhaw Records’ Grammy Winning and Grammy Nominated albums. Label founder-producer-arranger-musician Art Greenhaw has charted and continues to chart new courses in gospel, surf rock, instrumental rock, rockabilly, western swing, blues, traditional pop and world/Indian music.

Art’s motto: “… A piano and guitar in every home!” Special thanks to Frank and Pat who first believed, … to James Blackwood who later believed, … to Marvin “Smokey” Montgomery who nurtured, … and to The Light Crust Doughboys past and present for pressing on…