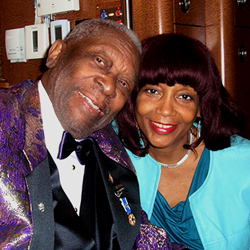 Rita King, the daughter of the legendary King of the Blues, Mr. Riley “B.B.” King, is the Ambassador for the Las Vegas Blues Hall of Fame. She is founder and CEO of Dream Bigger Productions, a nonprofit organization to fundraise for adolescents with Type I juvenile diabetes or Type II diabetes, event planning and showcasing of local talent in Las Vegas, Nevada. An Advocate for the Alzheimer’s Association, Ms. King also volunteers as a Group Support Facilitator. A caregiver herself, she offers education and support to other caregivers caring for a loved one with memory loss. Rita teaches the importance of utilizing “Me” time and skills on how to take better care of themselves.
As a published author, Rita King has pinned her second book titled, Messages from My Sister - God is Our Source and Supplier, released May 10, 2017. This project came during Rita’s struggle of the loss of her sister, Sunshine. The book is intended to offer comfort, strength, courage, and empowerment to those siblings who are having a difficult time of “letting go” after the death of their loved one.
Rita’s first book titled, On the Road with My Dad the King of the Blues Mr. B.B. King, is a coffee table photo book of her private collection taken over a span of 25 years, while on the road with her father. These snapshots capture his fatherly side, joys of accomplishment, and the love he expresses while playing his famous guitar, Lucille. Ironically, Amazon released the paperback version the same day of her father's passing, May 14, 2015. Rita King has also produced an All Backstage Access: Spoken Word - Tribute CD entitled, “The King of the Blues: On the Road with My Dad,” featuring Josh Knight Blues Band. Available CDBaby.com. The spoken word CD has been considered as a 2016 Grammy nominee.
Rita has traveled extensively throughout her childhood and adult life as an actor, a model, a dancer, and a budding photographer. Inspired by her play uncle, Jackie Wilson, Rita fell in love with the world of dance at the age of six. Later, she auditioned and won a featured spot on “Dance to the Music” featuring the “Get Down People” in Norfolk, Virginia. Living in Amsterdam, Holland and working small modeling gigs, Rita landed a non-speaking part as a moviegoer to a movie titled, “The Martina Bell Show.” The experience in cinematography production changed her life forever.  She enjoys listening to music, baking, knitting, and spending quality time with family and friends.