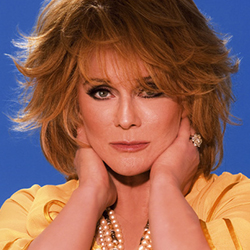 Ann-Margret began recording for RCA Victor in 1961. Her first RCA Victor recording was "Lost Love" from her debut album And Here She Is: Ann-Margret, produced in Nashville with Chet Atkins on guitar, the Jordanaires (Elvis Presley's backup singers), and the Anita Kerr Singers, with liner notes by mentor George Burns. She had a sexy, throaty singing voice, and RCA Victor attempted to capitalize on the 'female Elvis' comparison by having her record a version of "Heartbreak Hotel" and other songs stylistically similar to Presley's. She scored the minor hit "I Just Don't Understand" (from her second LP), which entered the Billboard Top 40 in the third week of August 1961 and stayed six weeks, peaking at number 17.[7] The song was later covered in live performances by The Beatles and was recorded during a live performance at the BBC. Her only charting album was The Beauty and the Beard (1964), on which she was accompanied by trumpeter Al Hirt. Ann-Margret appeared on The Jack Benny Program in 1961 (season 11, episode 24). She also sang at the Academy Awards presentation in 1962, singing the Oscar-nominated song "Theme from Bachelor in Paradise." Her contract with RCA Victor ended in 1966.
In the late 1970s and early 1980s, she had hits on the dance charts, the most successful being 1979's "Love Rush," which peaked at number eight on the disco/dance charts.[8]
In 2001, working with Art Greenhaw, she recorded the album God Is Love: The Gospel Sessions. The album went on to earn a Grammy nomination and a Dove nomination for best album of the year in a gospel category. Her album Ann-Margret's Christmas Carol Collection, also produced and arranged by Greenhaw, was recorded in 2004.